Closed breeding populations in the dog in conjunction with advances in gene mapping and sequencing techniques facilitate mapping of autosomal recessive diseases and identification of novel disease-causing variants, often using unorthodox experimental designs. In our investigation we demonstrate successful mapping of the locus for primary open angle glaucoma in the Petit Basset Griffon Vendéen dog breed with 12 cases and 12 controls, using a novel genotyping by exome sequencing approach. The resulting genome-wide association signal was followed up by genome sequencing of an individual case, leading to the identification of an inversion with a breakpoint disrupting the ADAMTS17 gene. Genotyping of additional controls and expression analysis provide strong evidence that the inversion is disease causing. Evidence of cryptic splicing resulting in novel exon transcription as a con- sequence of the inversion in ADAMTS17 is identified through RNAseq experiments. This investigation demonstrates how a novel genotyping by exome sequencing approach can be used to map an autosomal recessive disorder in the dog, with the use of genome sequencing to facilitate identification of a disease-associated variant.

It is well documented that population structure in the purebred dog can help to facilitate genome-wide association study (GWAS) approaches [1]. The development of most modern breeds within the last 200 years from small numbers of founding individuals has led to high levels of linkage disequilibrium (LD) within breeds. These high levels of LD lead to very strong signals of association being produced from GWASs for autosomal recessive diseases, even with very modest sample numbers [2]. Closed breeding populations, high levels of inbreeding and the extensive use of popular sires (dogs that closely fit the standard for a particular breed) can lead to rapidly emerging autosomal recessive disorders, as rare deleterious alleles are rapidly amplified. An example of an emerging autosomal recessive disorder is primary open angle glaucoma (POAG) in the Petit Basset Griffon Vendéen (PBGV).

The first recognised case of POAG in the PBGV was identified in the United Kingdom in 1996 and recent survey work completed in 2014 has demonstrated a 10.4% prevalence for the disease (personal communication, Peter Bedford). The initial clinical features of POAG are usually seen in 3 to 4 year old dogs of either sex, the disease being characterised by a small, sustained rise in intraocular pressure (IOP) and lens subluxation. In approximately one third of affected dogs phacodonesis and the appearance of the aphakic crescent associated with lens subluxation are seen before a noticeable rise in IOP (Fig 1). There is no pectinate ligament abnormality and the iridocorneal angle remains open until the late stages of the disease, when globe enlargement has developed. Retinal degeneration and a cupping deformation of the optic papilla are only seen in late disease. Pain is not a feature and the quiet, chronic clinical nature of this disease means that often owners only become aware of the presence of POAG when either the globe enlargement or a vision problem becomes noticeable.

As POAG is an autosomal recessively inherited disease, mapping of which are facilitated by the high levels of LD described, we designed a novel GWAS approach using genotyping by exome sequencing methodology with 12 cases and 12 controls with the dual aim of identifying both the disease-associated locus and causal variant for POAG through a single experiment. 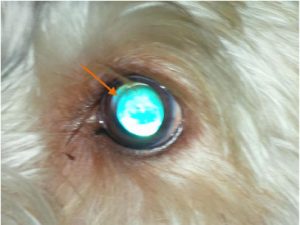 Exome sequencing was carried out using a commercially available human exome capture kit to capture the exomes of 12 POAG cases and 12 breed matched control dogs. Illumina sequencing produced a 15.0 Gb dataset of 250 bp paired-end reads (sufficient for low coverage of ~5x). Alignment to the canine reference sequence CanFam3.1 and variant calling across all 24 individuals identified a total of 841,115 SNP and indel calls (variants). After filtering variants with a minor allele frequency (MAF) of less than 5% and genotyping frequency (GF) of less than 80%, 61,977 remained. 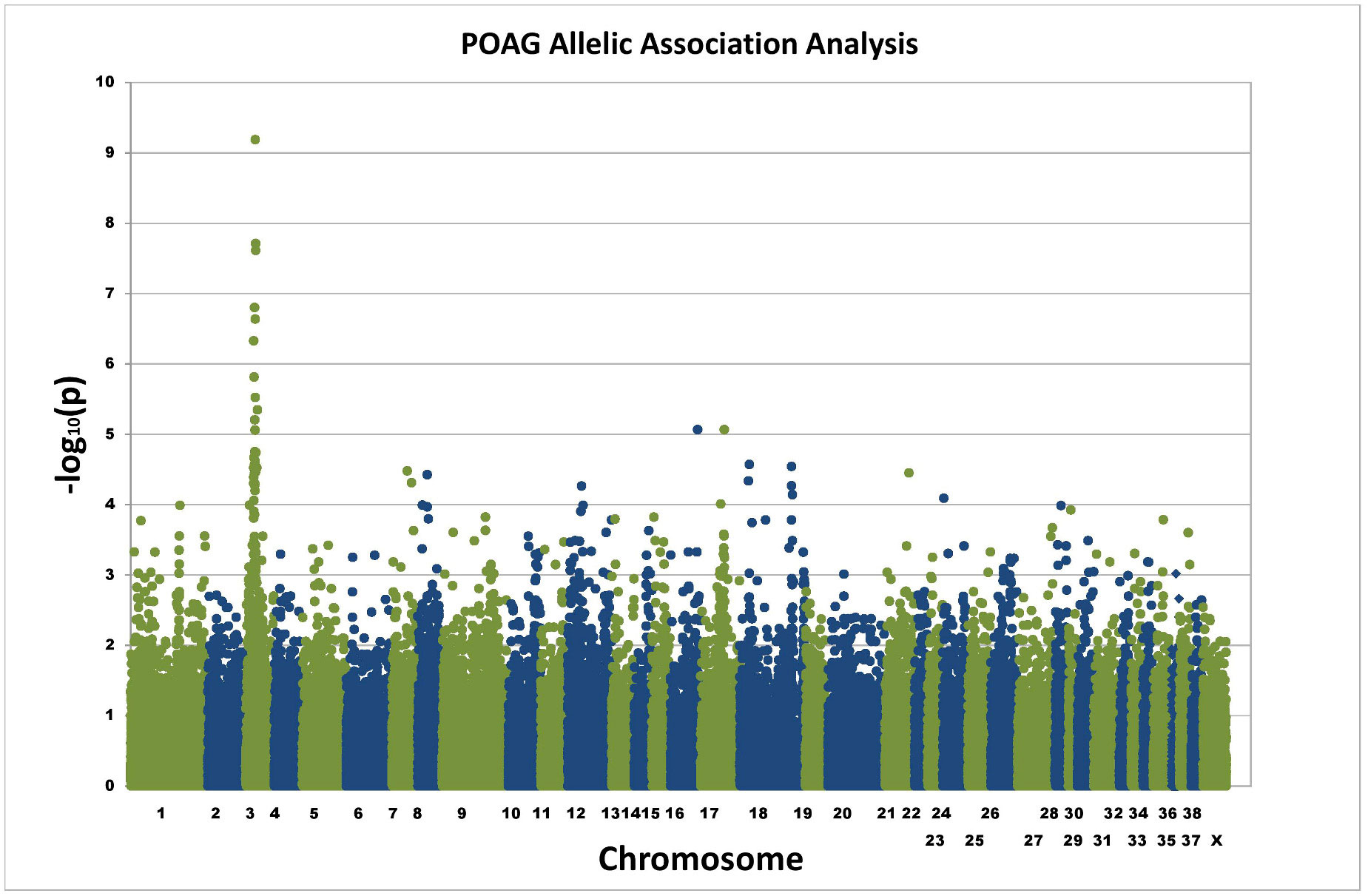 The SNP with the lowest p-value from the GWAS (top SNP) was a non-synonymous SNP in the SYMN gene (chr3:41,599,598). Conservation analysis across vertebrate species showed weak conservation of this residue, with a number of naturally occurring amino acids at this position. The variant is also predicted to be tolerated by SIFT. In total, 2,696 SNPs and indels were identified across the disease-associated interval, including 12 non-synonymous variants, although none segregated fully with disease status (i.e. homozygotes for the non-reference allele were present in both case and control sets). A list of non-synonymous variants with consequent predictions is shown in S2 Table.

The disease-associated interval was further investigated by genome resequencing of a single POAG case. To consider intronic, exonic and intergenic regions in detail, sequence read align-ments were visually scanned using the Integrative Genomics Viewer (IGV) [4]. Sequence read alignments indicative of a 4.96 Mb inversion were identified with breakpoints in intron 12 of ADAMTS17 (chr3:40,812,274) and a downstream intergenic region (chr3:45,768,123) (Fig 4). 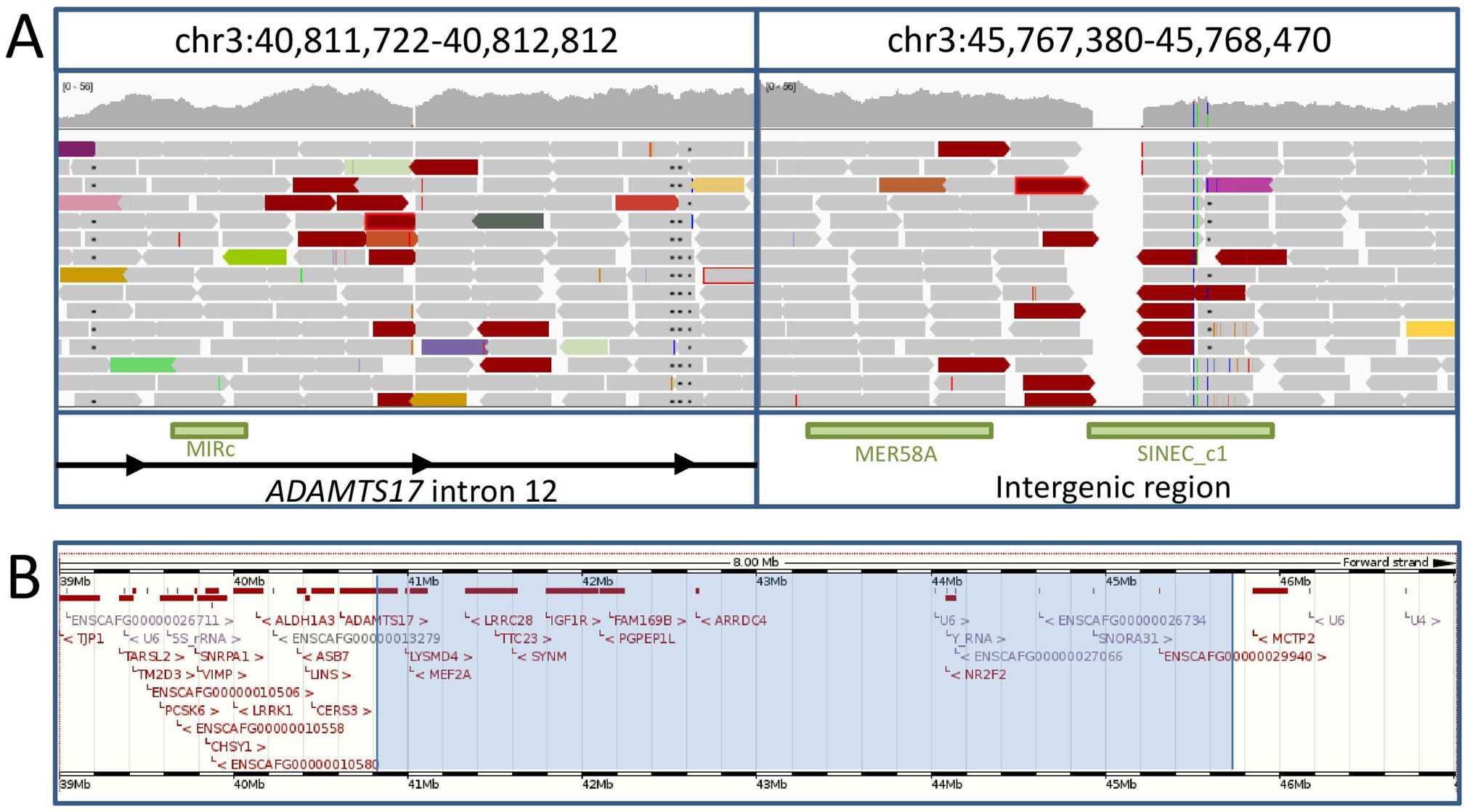 To gauge whether the inversion had an impact on gene expression, limited qRT-PCR experiments were performed. Tissues for RNA extraction were selected based on the availability of suitable case and control material and assessment of

RNAseq data generated from retinal RNA of one POAG case, showed concordance with the results of qPCR analysis. Expression of novel exons as the result of cryptic splicing was observed after the final normally transcribed exon of ADAMTS17 before disruption by the inversion. An example of a novel exon established through a cryptic splicing event is shown in Fig 5. A schematic diagram of ADAMTS17 exon arrangement is shown in Fig 6.

Table 1. Genotyping of an extended PBGV sample set for the POAG-associated inversion.

Petit Basset Griffon Vendéen Club of America does not provide specific medical advice, but rather provides users with information to help them better understand health and disease. Please consult with a qualified health care professional for answers to medical questions.