There are many examples in human history in which a population becomes geographically or culturally isolated and reproduces amongst themselves, becoming inbred. When this happens, the chances of both mating partners carrying the same deleterious recessive gene increases. When two recessive genes combine, it often leads to higher incidence of congenital defects and genetic diseases. 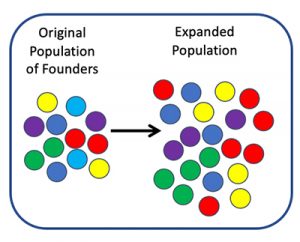 Purebred dogs are inbred populations. The breeds we know and love today were developed by close breeding of related dogs until their appearance and behavior showed consistent and predictable characteristics. During this time, the stud book (pedigree record of each dog in the breed) is open and new members of the breed can be added. When a new breed has enough members as well as an established breed club, the process of becoming an AKC recognized breed can begin. Once a breed becomes AKC recognized, the stud book is closed and additional dogs cannot be entered. The dogs in the stud book are considered the founders of the breed. They are a closed population.

The PBGV was recognized by AKC in 1990 when there were approximately 200 PBGVs in the registry. These 200 PBGVs became the original population of founders, as shown in the figure 1. Like every other AKC breed, the population of PBGVs expanded with time, as breeders and dog fanciers were attracted to our wonderful hounds. During that expansion, the progeny of some dogs likely became over-represented in the population (red dots in the expanded population). Perhaps those dogs more closely matched the breed standard or were the ‘winningest’ dogs in conformation shows.

But there is trouble on the horizon. The number of PBGV puppies registered by the AKC has been going steadily down since 2008. At this point, the AKC has designated the PBGV as a low entry breed. The PBGVCA Health Committee is concerned about the reduced numbers of PBGVs being bred because this may signify a decline in the breed’s genetic diversity.

Imagine that most worthy PBGVs are being bred, but less frequently. This would lead to an evenly reduced population of PBGVs that maintains the genetic diversity of the expanded population. That is, most of the colored dots are still present. (Genetic Diversity Figure 2)

However, it is also possible that the population is being reduced unevenly, with a loss of genetic diversity. Perhaps PBGV breeders are aging and new breeders are scarce on the horizon, some kennels are shut down without any genetic material in storage, or there is a focus on the ‘winning’ dog. All of these can lead to only a small fraction of the population being bred rather than the breadth of the population.

If genetic diversity is being lost, is that a problem? Yes. As mentioned earlier, all animals (including humans) carry deleterious recessive genes. If you have a genetically similar (or homogeneous) population of PBGVs, matings are more likely to occur between dogs with similar mutations, leading to disease. A popular sire that carries a deleterious gene can cause widespread damage to a breed.

Imagine what a treasure it would be to have semen samples from founder PBGVs deemed worthy by today’s standards, but which are forever lost from today’s gene pool.