When this happens, it's usually because the owner only shared it with a small group of people, changed who can see it or it's been deleted. 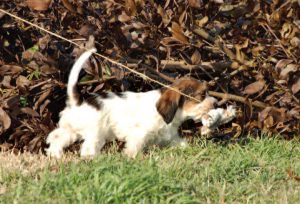 When I started hunting with Iris, she didn’t have a clue what she was doing, never went in the cover, just ran the lanes and made no progress until after several hunts when she finally tripped over a rabbit. I’ve watched a lot of novice dogs try to start out in the hunt field and have seen other handlers go through the same frustration that I experienced. For dogs with no experience, whether or not they succeed in the field has more to do with luck and persistence than anything the owner can do to help them. I still remember the moment when I saw the light bulb go off for Iris, when she finally figured out that she could go in the briar patch and rustle up her own bunny and have the fun of following the trail.

Most of us get our puppies from breeders who have the show ring as their main focus. They do a wonderful job of socializing puppies, but hardly anybody makes the effort to condition puppies for hunting. When I decided to breed Iris, I had to come up with a plan to condition the puppies for hunting so they would have a head start in the field.

A few years ago, one of our judges (Sian Kwa) presented a seminar at a hunt on this very topic. She gave a memorable example using a durian (the King of all Fruit, a very stinky sulfurous fruit which tastes like butter if you can overlook the sulfites) to show that things that we smell and taste when we are very young will be familiar forever and have good associations, even though we might not appreciate them so much if we are exposed as adults. Puppies that will be raised for drug detection start playing with plastic cylinders loaded with the smell of illicit drugs while still in the whelping box. Sian, who raises Dachshunds for blood tracking, has her puppies playing with deer feet and eating deer meat as soon as they go on solid food.

I used this information to create a plan for conditioning my puppies for hunting. I started with freeze-dried bunny ears and feet, and also freezedried rabbit jerky. Once the puppies were about three weeks old, I started letting them play with the ears and feet at least once or twice a day. They showed a lot of interest and persistence, and I kept this up until Oak got big enough that one day he swallowed one of the bunny ears whole! After that, I had to be a little more circumspect in how I offered them the bunny bits.

I had taken care of the problem of early exposure to the scent. Now I needed to get the puppies used to going into cover. Fortunately, the puppies were born in the fall so the season was prime for pruning. I used branches to create a brush pile in the back yard. When the puppies were five to six weeks old, I started taking them outside to eliminate after eating and to start walking around on the outdoor surfaces (asphalt and grass). They were interested in the brush pile and played in the edges. I wanted them to be a little more adventurous, so I made a “drag” using a couple of freeze-dried bunny feet tied to a piece of twine. I threaded the twine through the brush pile, and then had a helper release a couple of puppies at a time so they could follow the drag through the brush pile. The puppies had a lot of fun working their way over and through the branches, and the best part was that I could do this in my own back yard, no running grounds required, no hunt field needed. This exercise was tons of fun to do, nothing cuter than puppies worming their way through a brush pile. 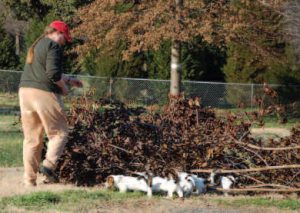 One of the beagle guys from our local club was nice enough to fix me up with a San Juan rabbit (halfway between domestic and wild). As the puppies grew up, I gave them the chance to see and smell the rabbit in a cage. Not quite the same as turning puppies loose in a one-acre practice pen like the beagle guys do, but again, I was trying to devise a plan that anybody could do. Domestic rabbits aren’t the same as wild rabbits in terms of smell and behavior, but any rabbit is better than no rabbit — the point is to give the puppy some kind of context to connect “that smell” with “that animal.” The puppies showed some initial fearfulness when they had a chance to get close to the bunny (in a small wire cage on the ground), but they soon got over their caution and started barking and sniffing. One caveat for this exercise is to be careful to avoid the fear period that usually occurs around eight weeks — if the puppy is exposed to the caged rabbit at this critical point, the progress for hunting might be slowed down.
The final exercise was following a trail. I went to a bloodtracking seminar a few years ago and heard a couple of guys from Germany talk about conditioning puppies for following scent trails. One of the presenters said that he used buttermilk to draw a line on the floor, and then let the puppies follow the line — again, easy to do on the kitchen floor where the puppies are being raised. I tried using a drag with bunny “scent in a bottle” and food treats to create trails for the pups to follow, indoors and outdoors.

I am lucky enough to have access to a running grounds, so I had the opportunity to get the puppies on the hunt field by 10 to 12 weeks. They followed me into cover, used their noses consistently and showed wonderful promise as hunting dogs. Three of the pups from that litter have gone on to hunt very enthusiastically, and are well on their way to completing their hunt titles.

So breeders, what the heck, let the puppies play with freeze-dried bunny feet, ears or pieces of a pelt. Feed them some bunny meat, freeze dried or fresh, when they start eating solid food. Puppy buyers, when you get your new PBGV puppy, make a brush pile in your back yard and get some bunny feet to make a drag so you can introduce your new puppy to cover. Take your puppy to a meadow with tall grass, or to the woods with some low undergrowth to encourage exploration and use of nose.

Exposing the puppy to a rabbit might be a little harder from a logistical standpoint, but hopefully you can go to a hunt and participate in a puppy or novice learning experience with a caged rabbit. Use your bunny foot drag to make a trail, and drop a little piece of food every foot or so to get your puppy off to a start on tracking. These exercises are fun and pretty easy to do, even in a suburban environment. (And don’t forget to practice your recall!)

Conditioning puppies for hunting isn’t hard at all. Give it a try! 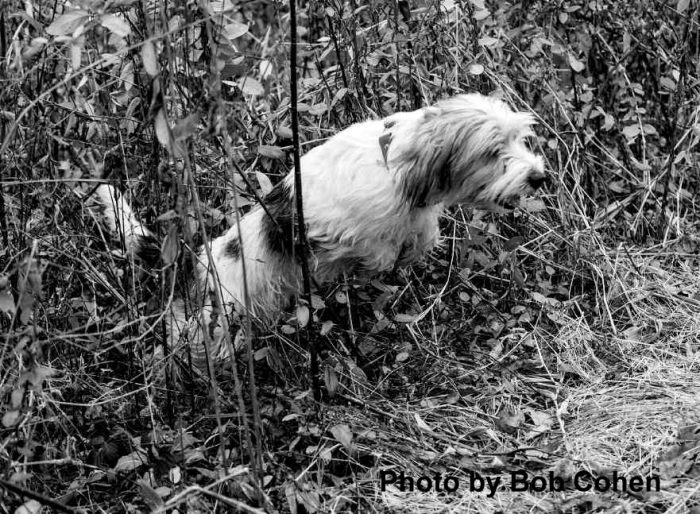