Timeline photosWith autumn here make sure on your daily walks your dog doesn't play or eat acorns. Acorns are poisonous to dogs and can block their stomach. Find out more at thekennelclub.org.uk/acorns. ... See MoreSee Less

At the University of Florida College of Veterinary Medicine, CHF-funded investigators are developing nerve block techniques to treat osteoarthritis pain in the canine stifle (knee) and elbow. Multi-modal pain relief is the accepted standard of care for canine pain management, so this study may add one more trick to the tool bag! bit.ly/3RRzqa7. #canineathlete #caninearthritis #caninearthritismanagement ... See MoreSee Less

Should We Breed With Carriers?

What Is a Carrier?

‘Carrier’ is the term given to an individual (of any species) that carries a single copy of a recessive mutation that is associated with a specific inherited condition, usually an inherited disorder. An individual will only suffer from a recessive disorder if it inherits two copies of the causal mutation, one from each parent. If it inherits a single copy of the mutation it will remain healthy but will pass the mutation on to about half of its offspring.

Once a specific disease mutation has been identified a DNA test can be developed that enables the identification of non-symptomatic carriers. Knowing which dogs carry the mutation and which don’t (the so-called ‘clear’ dogs) enables breeders to make sensible choices about the dogs they mate together. All dogs can be safely bred with provided at least one of the mating pair is clear of the mutation (see Table below). Breeding dogs that will never develop the condition should obviously be the priority for all conscientious breeders and the desire to eliminate a disease-associated mutation from a breed should therefore be the long-term goal. But the instinct to choose only clear dogs to breed from, as soon as a DNA test becomes available, may not always be a sensible choice and the rest of this document discusses why.

If carriers are prevented from breeding, the opportunity to pass the rest of their genetic material to the next generation is also lost and the genetic diversity of the remaining population is thus reduced. It is worth remembering that there is a clear and well-established link between the genetic diversity of a population and its overall health, and that breeding closely related individuals tends to lead to the accumulation of deleterious recessive mutations in the population. This is due to the fact that an individual is more likely to inherit two identical copies of a mutation if its parents share common ancestors than if they are unrelated, and the more common ancestors the parents share the greater that chance is.

It is also worth remembering that the disease mutation for which there is a DNA test is not the only mutation a carrier has. Every human, on average, carries about 50 recessive mutations and there is no reason to believe the average dog won’t carry a similar number. So the only real difference between a clear and a carrier is the single mutation that can be tested for. Both dogs will both carry around 49 other mutations that the breeder doesn’t know about and can’t test for. If carriers are not bred from and clear dogs are used extensively then there is a real risk that other mutations will increase in frequency in the breed and new inherited disease(s) could emerge.

There is no reason why the eventual elimination of a disease mutation from a breed shouldn’t be the goal, once a DNA test for that mutation becomes available. But, providing all breeding dogs are tested for the mutation prior to mating, the breeders can take their time and ensure that desirable traits are not eliminated along with the disease mutation and that the genetic diversity of the breed is not reduced.

The speed with which the mutation can be eliminated depends on several factors, including the frequency of the mutation, the population structure and the rate of inbreeding for that breed. The more frequent the mutation is the more slowly it should be eliminated. Calculating the true frequency of a mutation is not trivial, and requires a random subset of a breed be screened. Dogs that are tested once a commercial DNA test becomes available are not always representative of the breed as a whole, and similarly cohorts of dogs that have been sampled by a research institute during development of the DNA test are also rarely characteristic of the breed.

Carriers should always be included in the first one to two generations that follow the launch of a DNA test for a recessive mutation, regardless of the frequency of the mutation, to give breeders the opportunity to capture desirable traits, such as breed type and temperament, before they start to select for dogs that are clear of the mutation. Specific breeding policy for future generations should be breed-dependent and ideally formulated after consideration of factors such as the population structure and rate of inbreeding. But in general terms, carriers should only be removed from the breeding population if the frequency of the mutation is below 0.01 (1%), as this will mean only around 2% of dogs will be prevented from breeding. Avoiding carriers of a mutation that is more frequent will result in a greater number of dogs being prevented from breeding and could lead to a detrimental loss of diversity for the breed. 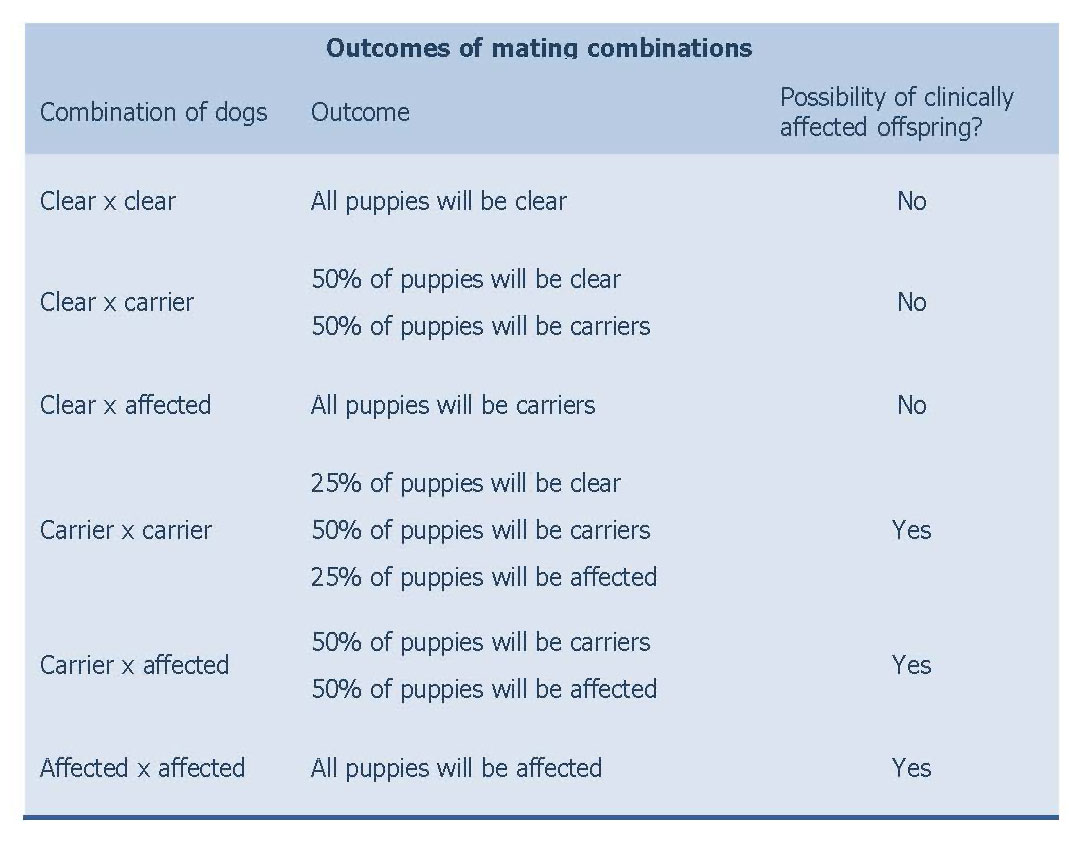 (PBGVCA does not provide specific medical advice, but rather provides users with information to help them better understand health and disease. Please consult with a qualified health care professional for answers to medical questions.)